"Neither an obelisk nor a rectangular box nor a dome seemed right on this site or for this purpose. But here, at the edge of the Mississippi River, a great arch did seem right." - Eero Saarinen, 1959

(Recall that 1959 was at the center of the Watchmen=Sirens of Titan post, taking us back to the stargate as symbol of death/rebirth)

The St. Louis Gateway Arch is "the centerpiece" of a monument to Thomas Jefferson's role in the Louisiana Purchase - it's full name is the "Jefferson National Expansion Memorial."

Since I had connected the St. Louis Arch to the WhiteSun/WhitSun, better known as Pentecost - which was a fire-in-the-mind event - I am reminded that Thomas Jefferson's fellow revolutionary, Samuel Adams, said "It does not take a majority to prevail...but rather an irate, tireless minority, keen on setting brushfires of freedom in the minds of men." 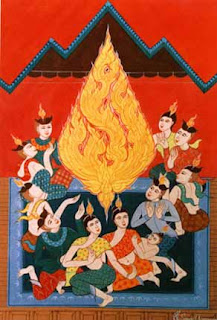 (Note the 3 pyramid motif in this Pentecost image from Thailand)

On our trip, we stopped off at another national monument: Mount Rushmore. It is here that they make it explicitly clear that Jefferson is being honored "not for his role in drafting the Declaration of Independence, but for his role in negotiating the Louisiana Purchase." As usual, the empire praises its own growth - I guess it's to be expected. But, that makes Rushmore another Jefferson National Expansion Memorial. The original plans even call for a cut-out of the constitution in the shape of the Louisiana Purchase! 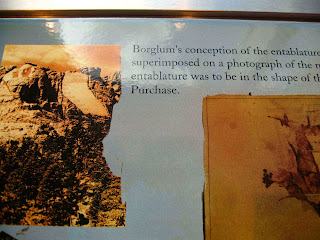 It's not surprising that crafters of grandiose sculptures, who are probably overcompensating for something, would constantly pull out the ruler and compare sizes of their obelisks. But this large display at Mt Rushmore beautifully places the Giza pyramids inside the Gateway Arch. 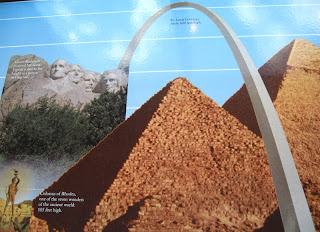 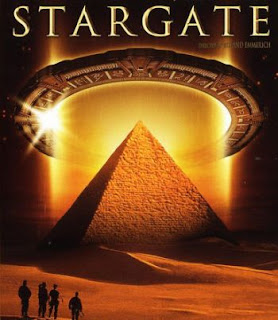 For some reason Egypt was all over the place as I toured "America's heartland." On the flight out to Minnesota, we found a replica of King Tut's throne for sale inside the Skymall magazine. Then we found another replica of Tut's throne on the grounds of the Lakota (TwinSun Nation). If I went into all of the weird places that Egypt popped up in big bold letters, that could be its own post. But, I should mention that when we stopped at Thomas Jefferson's house at Montecello, there was a replica of the Great Pyramid sitting on his mantel. Oh, on a side note: Boy is there a big painting of a beheaded St. John in the "family room."

Speaking of which, the guy who designed Mt Rushmore also sculpted "saints and apostles for the Cathedral of St. John the Divine in New York." Here are some pictures I took of the front of that Cathedral last year on June 21st, right around St. John's Day. What's with the destruction of New York motif? 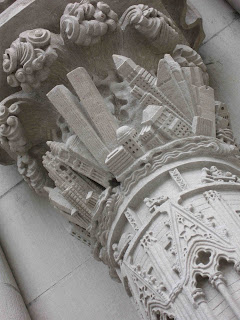 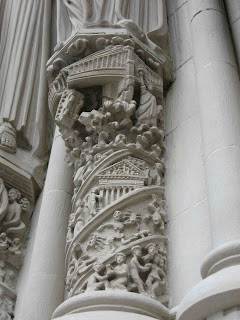 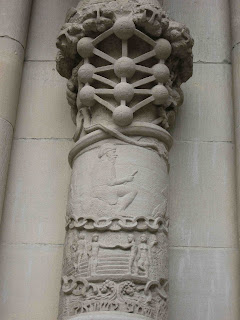 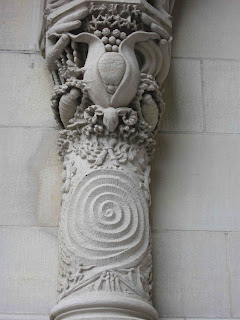 Just above the Norway Spiral shape, we see that rams-head horned vagina which makes me think of Bulova - the watch company that has its corporate headquarters very near my house. I always assumed it was a reference to the Masonic Jahbulon and that was confirmed when I was in North Dakota, the self-proclaimed "Peace Garden State." The Peace Garden is an international Masonic Shrine, located half-and-half on US and Canadian territory. I didn't get to go that far north, but I picked up a brochure for it - here's two close-ups showing the placement of the Bulova company's floral clock and the (Jachin and Boaz) twin-tower looking "Peace Tower". 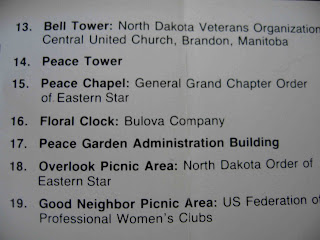 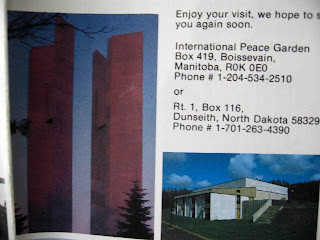 Oh sweet Jesus, Wikipedia just informed me that "Some building remains of the World Trade Center attacks of September 11th, 2001 have been placed in part of the garden." Now that we're looking at 9/11 resonating twin towers, let me take you to the Tom Petty concert I went to last night here in NYC (at Madison Square Garden, which is located on 33rd street). First off, before the show started, the big screens kept advertising an upcoming live performance of the score to "Lord of the Rings: The Two Towers." That should have been a hint as to what would happen. Melissa and I jotted down a setlist during the show and here it is:

1: Listen to her heart

2: You don't know how it feels

15: Don't come around here no more

Encore 1: Running down a dream 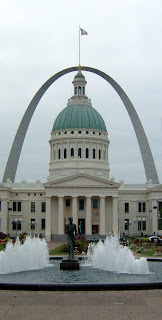 This further evidence of a connection between the Gateway Arch and the 9/11 event is probably the biggest sync of the night. But I also like the presence of the Honey Bee and the fact that the 9/11 resonating songs are followed by the First Flash of Freedom.

But there was another interesting thing that happened. Though I often find the chosen imagery fascinating, I try to avoid watching the graphics they put up on the screens - and instead watch the musicians. However, right at the end of "I should have known it" there was a static-like series of white-gray abstractions flashing on the screen that caught my eye. Now, I saw an image that was either a cow-skull or a Baphomet in that static. I told myself that I was probably imagining it, but right then the song ended and Tom Petty says "Let's bring some light in here. Can we turn the lights on?" And the house lights turn on for ten seconds or so. Very, very interesting.

Some will see that, or even the Masonic connections I have pointed out, as something sinister. I don't see it as such (or only as such). Especially since he followed the light bit up by immediately playing "Learning to Fly," a song that I think perfectly encapsulates what we're trying to do with Synchromysticism.

This may be my last post before the Cardinal Climax and the first two weeks of August, especially since I've lost internet access in my home (I guess my Smoke Signal patterns caught up to me). Since all the signs are pointing us to something BIG (whether in that time frame or not), I want to leave you with a reminder from Labyrinth of the Psychonaut's Cracks in the Wall, where Steve's guest/co-host Will said, "Doomsday is Dome's Day." We have the power to make this world heaven or hell - we can embrace our natural divinity or succumb to fear - it's up to us to stay strong and stay positive. August 1st is the next marker on the Wheel of the Year and it's a harvest festival. Well, you reap just what you sow.

Much love to you all.