A crazy week of Crazy 88s, Triple-8s, and Double Rainbows

I've been without regular internet access for awhile now, plus I've been working certifiably insane hours at work, planning the wedding (now less than 3 weeks away), I'm wrapping up the animation for the second "Happy Creatures" video and colored some artwork for the synchronistic graphic novel I'm doing with illustrator/inker Peter Palmiotti (artwork that he sent me on 8/4, the date of the Double-Rainbow). So, many apologies for being missing from the online conversation, but I've been a busy little bee.

The offline syncs have been massive and are piling up, so let's hop to it.

I had connected the number 88 to the BP spill and mentioned the importance of the spill's 88th day as well as the date 8/8. So now we know the spill lasted 88 days and, if there was any remaining doubt that the 88 is encoded into the spill, here was the front page of the newspaper from 8/8: 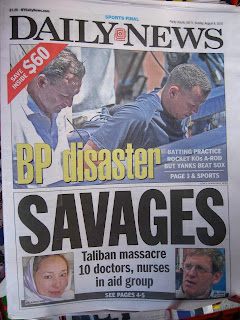 I should have remembered that the first post devoted to 88 included the idea of the Crazy 88s, from Kill Bill. The same day, August 8th, another front page of a newspaper here in NYC read "Are they Knuts?" - in reference to the Knicks basketball team. That night, I saw a guy wearing a Kill Bill T-Shirt. The next day, another front page read "Gun Nuts" - in reference to gun wielding police officers that had filed mental instability claims. The third day, the front page of one paper read "Plane Crazy" while another read "Planely Nuts" - both stories about the JetBlue baggage carrier that snapped while at work and shut down the airport. A BIG part of this is synchronicity, but I still think that many days with the word "Nuts" on the front page of New York newspapers has to be a conscious effort on behalf of Culture Creators to put a vibe out into the populace at large.

On 8/9 (8+9=17) I met a guy named Arion, who introduced himself as spelling his name "like Orion with an A." That immediately got my attention. Working at a bar/restaurant in the city, you meet all types of people, but after he had a few drinks this Australian musician started talking some fascinating topics, unprovoked by me or anyone else. He claimed to have witnessed extraterrestrial craft multiple times in the same OZ location, with the second time including a beam of paralyzing light that filled him with energy. I asked if he received any information from the beam. He said the experience left him sort of psychic and that he has been super lucky at gambling ever since - winning Take5 a few times this year. ET Beams sending you lottery numbers - where have I heard that before? In the middle of our conversation he said, "You look different now." I asked, "Oh, am I a shape shifter?" That spurred hum to tell me the story of how Madonna sat on his lap when he was 17 years old and told him, "You're a shape shifter just like me," and then she changed shape, into a very angular creature with strange eyes. I asked what he thought of Madonna's embracing of Kabbalah and he claimed that he himself was a "Kabbalistic sorcerer" and that what Madonna practiced was evil witchcraft. He told me it was within my power (and my duty) to stop her because "as a Capricorn, you control the physical plane." I have no intention of going out to do magical battle with Madonna, that seems absurd yet all so fascinating. But then he turns around and I see that his shirt has the Red Letter C as the only design on the back!

What really got me to sit down next to him was overhearing him mention that his birthday was "next week, on 8/16." That date had become important for me just a few days earlier. Seeing a triple-8 (888) a few times in a row made me consider it as a progression from the 88. I thought to myself, well 8/16 would be a triple-8. The next day after thinking about 8/16, the sync whole writes about double rainbows and Melissa points out an old photo she had stuck in a collage on our wall. The photo is from 8/16/1998 and is of a double rainbow. 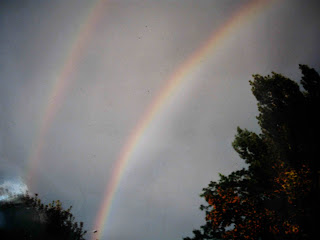 Her young handwriting on the back: 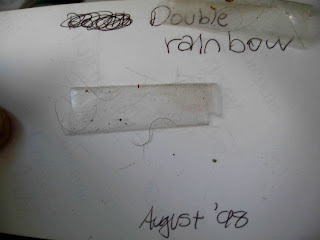 1998 is an important year in my perspective and I take it very seriously whenever it pops up. Something that just occurred to me is that a rainbow is the full (light) spectrum and an 8 is also the infinity symbol. So a double rainbow and an 88 are the same as well.

That this photo should reside unnoticed for 2 years inside a collage adds a whole other weight to the sync for me. It was one night while laying in bed with Melissa and staring at one of her collages that I first thought of a good analogy for the three layers of existence. I saw each photo as the individual, with all the complexity and beauty that it contained within itself. The collage, the totality of those individual photos arranged by human hand, was the human attempt to manipulate and/or structure reality - that can be on a Societal level, Governmental/Political, Institutional. Artistic, Well-intentioned plans, Conspiracy and so on. But there was a third layer, that of the light and shadow falling on the wall and the collage and the photos, which created a much broader beauty. This third layer contained the lower two, yet was the type of beauty that went beyond human control. I saw that all that we do is but a fraction of how the universe designs itself. Yet, that cosmic portrait (another first layer photo) was displaying itself on a wall made by human hands and that there were walls and buildings stretching out in every direction making another collage and then another 3rd layer of the planet and cosmos with our architecture and sum of human striving/achievement being only a fraction of that. Perhaps this continues on ad infinitum.

While I was studying the idea of the WhiteSun/Whitsun/Fire-in-the-Brain/FlamingTongue/FlamingLips/Pentecost, I learned that the biblical event was said to have happened 50 days after Easter. Well, as I was looking at all that, The Sync Whole laid out the concept of the 7-11 eclipse being a strong resonator of Easter. So, I counted 50 days from 7/11/2010 and put a small pink dot on the calendar with a highlighter then forgot all about it. The date is 8/30 which would also be the triple-8.

I'm listening to Steve&Will's Cracks in the wall #7 and I just realized that the background I designed for the Squares That Touch blog has a double rainbow on each side, or a double-double-rainbow. If a rainbow is 42 degrees and a Double Rainbow is 84, consider that the quadruple rainbow would be 168, bringing us back to 8/16 (which is 8/8+8).

And, me of all people, should have realized why I colored this one-armed girl's shirt green - by being partially dismembered, she's an Osiris resonator. I swear I had not thought about it till Steve mentioned it. The cut of the shirt, as Peter drew it, just seemed like it would look best in green.

Steve points out that a 33 is also an 8, so the Time Warner postcard I received with the three 33s would also be a triple-8. 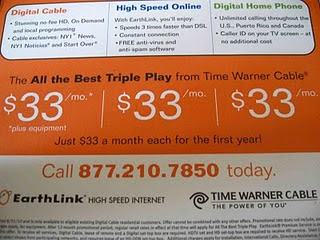 He brought back up California's Prop 8 which Michael had commented on, and his comment led to a SyncWhole post that coincided directly with a dream I had the night before. Since I've been offline, I wondered if there were other ways to communicate. Well, I've had dreams that I'm meeting some of you on the astral plane. Is it just a dream or is the dream real?

Lastly, Steve&Will talk about the 8/13 floodwaters. Funny thing is, starting on Friday 8/13, the restaurant I work at began to flood, as water poured through Cracks in the Wall - and I've spent the last few days at work trying to hold back the tide of this flood until it can be fixed. Very sync heavy times we're in. It also brings me back to the St. Louis StarGate post and the convo I had with Michael about the opening of the Floodgates.

I'm now thinking that if Mem is Water, a Pitcher and a Picture both store memories. So, is it possible that the pitcher-holding Aquarian water bearer holds our memories of universal knowledge? Are the Aquarian floodwaters the unleashing of that flood of memories?

I wish I had time to write more, being without internet has been a little frustrating, sorta like blue balls, but it has also allowed me to redirect that energy elsewhere. Oh, and it has not escaped my attention that my period of being without internet comes in tandum with the stories of Smoke and Smog covering Russia. I need to write more about the Smoke Signals concept, so much to say. Yet, for now I leave you with something I was able to do offline, another Podcast. This was just a test of a new method of recording them and it worked pretty well. That means I'll be bringing the Podcasts back and I should have more interviews coming to you very soon. If any of you want to be part of the conversation, send me an email: AllTheHappyCreatures (at) gmail.com

I still want to document the amazing syncs from the road trip and share more photos with you all. But, for now, I'm caught in the August Rush.

See you in my dreams.