We have looked at Saturn a number of times (with an emphasis on its moon Titan) and, as everything seems to do around here, it went hand-in-hand with the bee and honey motifs. Saturn is also the mythological equivalent of Osiris and he's been all over this blog. So allow me to go back to Memorial Day 2010 and cover a story that slipped past my radar...
I've seen a few people mention that the Guatemalan sink hole appeared on day 42 of the BP oil spill (42 being the number of Jupiter and the focus of the SyncWhole blog's study). Well, I just saw someone comment that there was also a swarm of bees on Wall Street that same day!
That was Memorial Day - I guess I missed that story while eating at my MoM's Bee-Bee-Q (Q=17).
So what happened? Tell us oh great ABCDisney...

Did you get the same ad before the video I got? For the mafia-run Waste Management, another variation on our double-M? And not just any double-M, but a green and yellow one! Crazy. 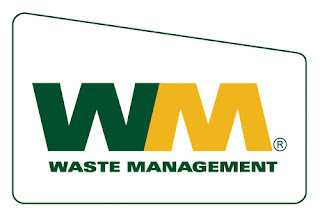 The bees descended on a restaurant called Cipriani. The name Cipriani means "from Cyprus."
Cyprus takes its name from the Cypress tree.
As per Wiki: "In Greek mythology, the cypress is associated with Artemis. Ancient Roman funerary rites used it extensively. Cupressus sempervirens is the principal cemetery tree in both the Western and Muslim worlds."
That the bees chose to gather on such a place, takes us back to our study of bees as a symbol for death and rebirth.
Further weirdness comes our way as an astute reader at the Huffington Post noted a bee sync:

When we travel over to the NYtimes video page upon the link provided, indeed we get a story about a "House of Bees."
About a minute into the video, there's a shot of a bee hive then the camera tilts up to reveal this image of Saturn: 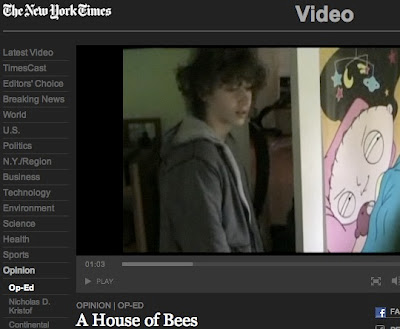 Now that I'd seen Saturn/Osiris in here, I immediately skipped to 3:17 to see what was waiting. Ah, it's a bee climbing on a man's middle finger. 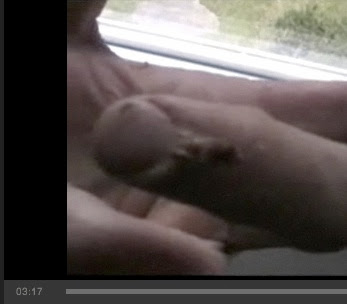 You know, the finger associated with Saturn: