"We Love You But We've Come To Kill You" 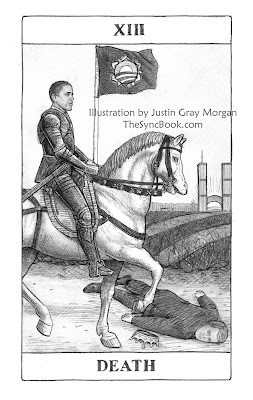 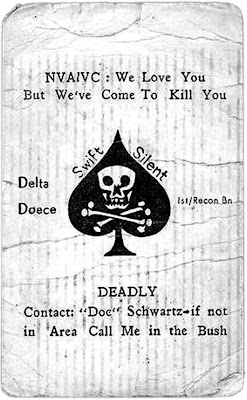 
Trying to suggest something about the duality of man?


﻿ "Mr. Obama is the liberal law professor who campaigned against the Iraq war and torture, and then insisted on approving every new name on an expanding “kill list,” poring over terrorist suspects’ biographies on what one official calls the macabre “baseball cards” of an unconventional war. When a rare opportunity for a drone strike at a top terrorist arises — but his family is with him — it is the president who has reserved to himself the final moral calculation." (NY Times)﻿
﻿

﻿
From the NewYorkTimes, note the adjacent story with the Queen as another card


“A very strange story, that 6,000-word front-page New York Times piece on how, every Tuesday, Barack Obama shuffles “baseball cards” with the pictures and bios of suspected terrorists from around the world and chooses who shall die by drone strike. He even reserves for himself the decision of whether to proceed when the probability of killing family members or bystanders is significant. . . . The Osama-slayer card having been vastly overplayed, what to do? A new card: Obama, drone warrior, steely and solitary, delivering death with cool dispatch to the rest of the al-Qaeda depth chart. So the peacemaker, Nobel laureate, nuclear disarmer, apologizer to the world for America having lost its moral way when it harshly interrogated the very people Obama now kills, has become — just in time for the 2012 campaign — Zeus the Avenger, smiting by lightning strike.* A rather strange ethics. You go around the world preening about how America has turned a new moral page by electing a president profoundly offended by George W. Bush’s belligerence and prisoner maltreatment, and now you’re ostentatiously telling the world that you personally play judge, jury and executioner to unseen combatants of your choosing and whatever innocents happen to be in their company.” (Washington Post)﻿﻿﻿﻿

The drone attacks also evoke the classic "Death Cards" from Vietnam, particularly "Death from Above" . . . 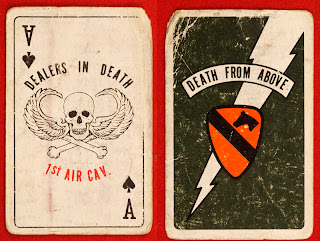 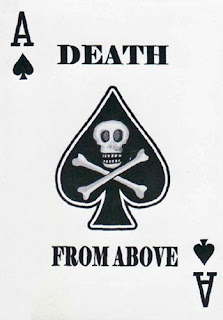 A detailed history and many more variations at http://psywarrior.com/DeathCardsAce.html


. . . a theme that ﻿was revisited with the "Most-Wanted Iraqi playing cards"

"In the 2003 invasion of Iraq by a United States-led coalition, the U.S. military developed a set of playing cards to help troops identify the most-wanted members of President Saddam Hussein's government, mostly high-ranking Baath Party members or members of the Revolutionary Command Council. The cards were officially named the "'personality identification playing cards'" -- http://en.wikipedia.org/wiki/Most-wanted_Iraqi_playing_cards

Oh, this just in: 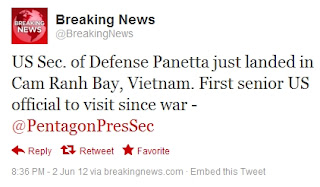 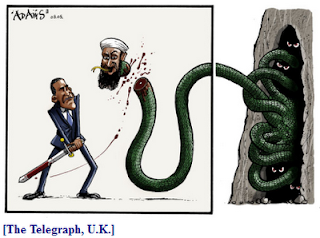 ... Once conquered by Zeus' thunderbolts, Typhon was cast into Tartarus" 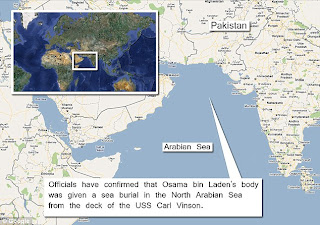