About a week and a half ago I woke from a dream with the words of some disembodied voice echoing in my ears. The voice said, "Stock up on batteries, there's going to be a blackout." As I live in a small apartment with no generator or battery operated devices, I wasn't sure how batteries were going to do me that much good. It wasn't like I wanted to dismiss the dream voice, but I must admit it seemed a bit comical and melodramatic.
Then, two nights ago, we lost power in our apartment. It was the first blisteringly hot day of the summer so I had put our airconditioner in earlier that day. Somewhere around midnight we must have tripped the circuit-breaker and lost power.
Here's the problem. We live above a restaurant--which, on most days is pretty awesome since I'm very much a night person (and occasional insomniac) and there are no downstairs neighbors to complain about how loud we are at 3am or 5am or whatever. However, when the circuit-breaker is in the restaurant's basement and they don't open till noon the next day, what would have been a simple flip of the switch in any other apartment amounted to a blackout in ours.
One Dark Night later, I learned the value of a flashlight and may have to "stock up on batteries" afterall.

But that's just par for the course (or "staying the course" as Obama would have said, back when we all called him George Bush). Here's the quirky bit: The "terrorist" in Dark Knight Rises is named "Bane," and, thus-far, the 2012 presidential election has focused on Romney's connection to the firm "Bain Capital" 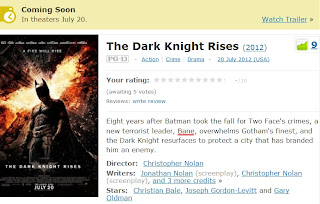 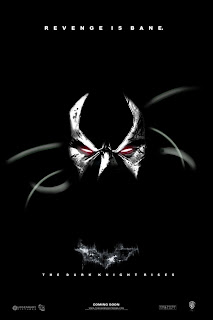 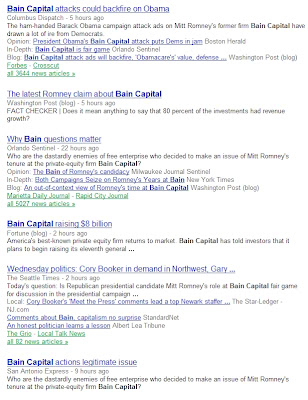 It is an election year so all of this could potentially be intentional propaganda, but that's for each of you to decide. Either way, if Obama is resonating with the Dark Knight, it seems Romney is resonating with Bane. {Please note, I think any politician that gets up there is a bad choice, so do not take this as an attack on Obama in favor of Romney.}

Comics fans will remember Bane (created by another Nolan--no relation as far as I can tell) as the character who literally breaks Batman's back and leaves him a paraplegic. This was 1993, the year DC comics was trying to shake up some sales by killing Superman and paralyzing Batman, replacing them both with new versions (until the novelty wore off and both Batman and Superman somehow recover from death and paralysis).
It is worth noting that, a few years after the Batman backbreaking story, Bane "resurfaces in the story arc 'No Man's Land', serving as an enforcer for Lex Luthor during Luthor's attempts to take control of Gotham under the cover of helping it to rebuild."

﻿﻿...
UPDATE:
Check out this great image from Tommy: 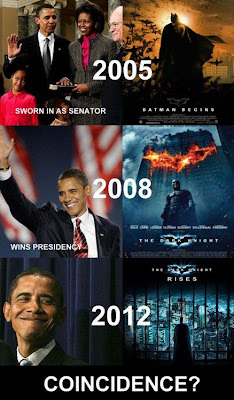 and I can't help but notice a strong similarity between that Dark Knight Rises poster and the final scene from Fight Club. 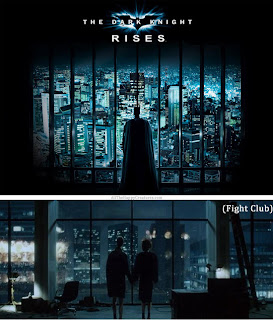