In the last week and a half I have had the pleasure of talking to so many great minds and having some amazing conversations.

Here's a quick sampling:
I've been trying to keep an archive of the shows I'm on and things like that, but it was getting a little unwieldy. So, I've had a little side project going on the back burner to make an archive that's more user friendly. After all these shows this week, I figured it was time to turn up the heat before it gets even harder to keep up with. It's now ready, and anyone interested in such an archive can hop on over to: http://audiocreatures.blogspot.com/ 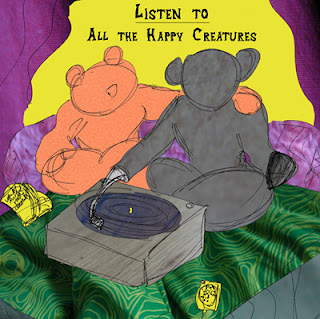 I guess I should explain that roundtable a second. Recently, Bill Klaus asked me if I would be interested in helping to create a new audio series that was more conversation based, instead of the classic interview style that so many podcasts and radio shows use. Since he and I had both had conversations with David Plate that were so good that we wished we had recorded them, we're tentatively calling this thing "Always Record."

The talking is loose and unpretentious. Though there is a lot of Kubrick, the topics are varied. And, ultimately, I think many of you will find this enjoyable. Click here to enter: http://www.talkshoe.com/tc/120495

There were other conversations this week that were not recorded...

I spoke to Michael from Gosporn and every time I speak to him I have that same "man, I wish I recorded this" impulse. He told me about connections he made between Watchmen and the second volume of League of Extraordinary Gentlemen that were super solid. As everything has lately, it found a way of coming back to Kubrick. I wonder why Kubrick is surging so strongly in the sync community right now?

There's another ongoing conversation that I am reluctant to write about publicly. Suffice to say, there's some drama between two players in the sync community and I was kinda called in to moderate, but I found a lot of it disappointing and immature. There is a silver lining however. While I've never been a big 2012 guy, it is in these conversations, where people can't help but project their shadows and refuse to take responsibility, that I see part of the value of 2012 as a concept. With a quasi-deadline in the conversation, you get a sense of what is really important to those people who see it as an important date--particularly when there's conflict in the mix. All I know is that I'm getting more and more cautious of the many gurus preaching a 2012 shift who aren't willing to do some of the hard work here on the ground.

As a guy who is doing so much talking lately, I understand that talk is cheap. I don't want your words, I want your action. And all of us, no matter who we think we are, we have some serious work to do.
Posted by Alan Abbadessa-Green at 5/07/2012 03:45:00 AM