If you've been reading our blog lately, you are well aware of the strange string of Sirius rituals currently going on. From NASA to the British Royals to the 2012 Election, everyone seems to be in on the joke.

Since I have had many powerful personal synchronicities around Sirius, as well as the fact that much of my research focuses on the bigger and stranger forces that influence our reality, I always like to remind our more conspiratorial-minded readers that not everything is ritual. There are events that are way outside the hands of human conspirators and way outside the realm of events they could even hope to control or influence.

However, when certain events seem ritualized and I say that certain people seem to be in on the joke, I mean that too. 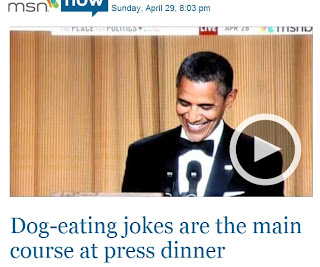 MSN: From the Secret Service to the Kardashians, everything was fair game at the annual White House Correspondents' dinner. But the featured item on the menu was dog ... jokes -- which figured, since Barack Obama's old admission to eating dog as a child was just recently revived as a campaign sideshow. "Last week we learned that the president's two favorite steaks are rib eye and seeing eye," cracked comedian Jimmy Kimmel, the evening's host. But even Kimmel got a taste that it's tough to work a room better than the Obama himself. The president touched on Sarah Palin's recent hosting of "Today" to segue into the night's toughest line: "What's the difference between a hockey mom and a pit bull? A pit bull is delicious."

Right on schedule, this week Steven Greer (who most people in the ufo/disclosure community regard at best as a con artist and at worst a disinfo agent) presented "Sirius" the documentary!
My god, they've already raised $33,000 for this in just a few days. And they're asking for $250,000. I will never again feel bad asking someone to buy a Sync Book for $12.


Speaking of which, we at SyncBookPress are putting out a new book this week from Douglas Bolles (one of the two hosts of the 42 Minutes podcast). The book is called Winter's Labyrinth and it comes out on May 5th. Please buy $250,000 worth of them. Siriusly.