One of my earliest posts (back in February) was about Smoke Signals. In it, we began looking more closely at the synchronistic implications of the Norway Spiral and the ramifications a shut down internet would have on the spreading of information. Obviously, smoke signals were a method of communication in and of themselves. But, I have begun to see non-man-made smoke signals as correlating to communication as a whole.
If you're reading this blog, you're probably on a quest for truth (be it spiritual, political, self-actualizing, whatever). I would wager a guess that the internet, the proliferation of information and the access to instant communication has benefited you on your way.
So, if there's anything to this connection between smoke signals and our modern society's electronic interface, we should look closer. Because there was a BIG smoke signal that started last week in Iceland. And it shut down modern man's system of metallic air ships. Or perhaps you hadn't heard. 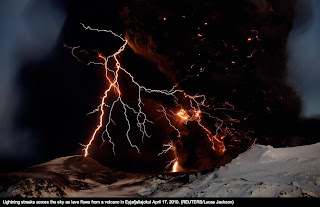 Now we have the head of the CIA coming out this week and warning of a cyber-attack in very loaded terms when addressing a group of 300.

Central Intelligence Agency director Leon Panetta told 300 Sacramento Metro Chamber Cap-to-Cap delegates that the next “Pearl Harbor” is likely to be an attack on the United States’ power, financial, military and other Internet systems.“Cyber terrorism” is a new area of concern for the CIA, Panetta said. The United States faces thousands of cyber attacks daily on its Internet networks. The attacks are originating in Russia, China, Iran and from even hackers....“The next Pearl Harbor is likely to be a cyber attacking going after our grid…and that can literally cripple this country,” Panetta said. “This is a whole new area of threat.”

Funny, I thought they already had their "New Pearl Harbor." Think they wouldn't do it again?
The name of the photographer who snapped that volcano shot (on the 17th) is Lucas Jackson. (Sort of reminds me of the band Luscious Jackson). Also funny that RedIce just posted an interview with Lucus (who we had talked about in the first Smoke Signals post) to follow up on his view of the reoccurring spiral shape as portent of coming cosmic calamity. On a more positive note, it seems smoke is also on the minds of the SyncWhole crew.
Wow, I hadn't thought about that band in years, but I just searched them, knowing there had to be a sync since they popped into my head. What do you think was the name of the last Luscious Jackson album? Wouldn't you know it: 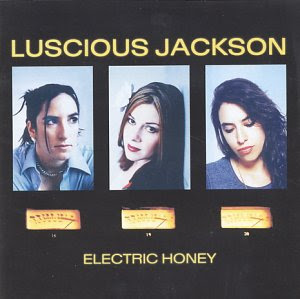 Thank you universe. That's a perfect segue into the next part of this. In the post "Lady Gaga and The Killer Bees" we first looked at the use of honey as poison and the bee as symbol of femme fetale. And we even connected it to the double "M."
After that post, I saw an ad for this book on the subway: 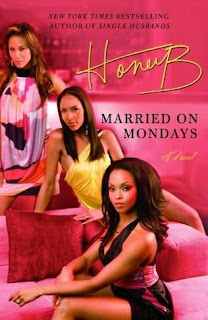 Not only is the author's name Mary B. Morrison, writing under the name HoneyB, but her book is called Married on Mondays. Bees and Ms. Interesting.
I pointed out in that other post that I believe there is a positive and negative side to all of these patterns (as there is to all of life) and that my girlfriend's name, Melissa, comes from the Greek and means "Honey Bee." What I didn't know until recently, is that my mom's name, Deborah, comes from the Hebrew and also means "Honey Bee." Assuming there's no unintended underlying Oedipal weirdness, I think that's pretty cool. Two very positive women in my life who can show me the good side to this meme.
Plus, BM is also medical shorthand for "bowel movement," and those are pretty nice too. :)
Mostly kidding; sorry ladies.
Seriously though, there are many positive aspects to the honey bee thing.
However, other day I was on the phone with my friend Rammer (an awesome artist, go check him out) and he had just seen the movie Kick Ass. Apparently, in this movie the characters are talking about wanting Count Chocula cereal, but can't find it and end up with a HoneyBee cereal. Then, while the kid's mom is in the middle of eating a bowl of her HoneyBee Cereal, she has a brain aneurysm and dies! What is with this repeated theme of poison honey?!?!? 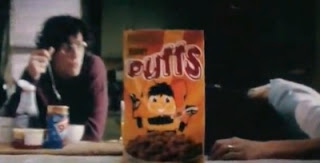 I had a paranoid little thought later that night while making dinner. I looked at the honey I was adding to the stir-fry veggies and rice (ooh so yummy you missed it) and thought: There's been a lot of talk over the last few years about "colony collapse syndrome" and "disappearing bees." What if there's something wrong with the bees and it's going to carry over into the honey? What if the repeated theme of bees and death are a kind of smoke signal? 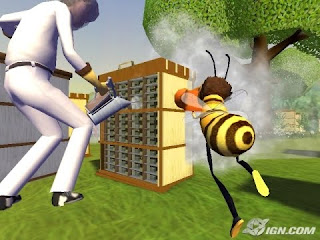 Or, what if all the reoccurring Osiris symbolism (you know the god of grain and death) is a synchronistic confirmation of all our worst fears about GMO foods and/or the Kissinger/U.N. "food as weapon" doctrine. Food for thought.
Rammer also informed me that a debate broke out between the folks at grinding.be and VigilantCitizen. Now I don't want to get between the transhumanists and the ultra-religious as they fight - perhaps the truth is somewhere between their two camps. Whatever. What they were fighting over was the meaning of the Black Eyed Peas song "Imma Be." Rather, they were bickering over the video.
But, however you wish to interpret the video, it's no stretch to realize that, in the song, they are singing "I'm A Bee."
Last night I speculated to Melissa, my honey bee, who is also a dancer, that perhaps there is an innocent repetition of this theme by the performers since bees communicate through elaborate dances. If you were a Lady Gaga or a Beyonce or a Black Eyed Pea and you sang and danced for a living - and as a way to communicate through your art - a bee would be an appropriate symbol for you to adopt.
She agreed, but then told me that I had just reminded her that she heard the Erykah Badu song "Honey" earlier that night. She pointed me to the lyrics:

Fly free baby, fine with me
I'm in love with a bumble bee
Ooh Slim boy, you killing me
But you so sweet to me

You know, the Erykah Badu that had just created a bit of a stir by filming her latest video at the location of the JFK shooting. The "stir" is that she's naked in the video. I don't care about that. Look deeper.

On the video, for Badu's track Window Seat, the singer drives to the Plaza in scenes consciously aping the famous grainy Zapruder movie footage of the assasination, and begins with familiar radio commentary of Kennedy's fateful visit and Badu wearing a scarf in the style of Jacqueline Kennedy.She then walks down the route that Kennedy took, while shedding her clothes (with the video pixilating her genitalia). By the time Badu arrives at the point where Kennedy and Texas governor John Connally were struck by Lee Harvey Oswald's[sic] bullets, she is naked and – after what sounds like a shot being fired – falls abruptly to the ground as if struck. The video then shows a blue graphic that appears to seep from Badu's head.
Badu said she shot the video in one take at 3.30pm on 13 March [3/13], with a hidden cameraman following her.

See, now it gets a bit scary. Did I mention that the double M - in numerology - would be 44?
I was over at Jake Kotze's blog and noticed a link to the slow-emanations blog with the post subject "88." Since I have been looking at the 88 for the last couple months I took notice. The entire post is a single, yet beautiful, image of a Tarot-like 88, the blogger is from North Carolina, and above his info reads "MIRRORRORRIM."
Then, while I was at grinding.be I took special notice of another post simply featuring one image, Sunset over Asheville, North Carolina.
This struck me since that's where Obama, the 44th president, just made headlines - by hiking. 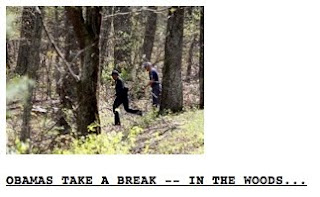 It's a bit strange that a neo-con site like Drudge felt a link to a photo of two people they dislike hiking was important enough to merit a headline. It's not like it was a photo of them hiking at Bohemian Grove. Well, it's strange only until you start incorporating lessons from people like Steve Willner. If you're not listening to his "Cracks in the Wall" series, you're missing out.
Many synchromystics, and anyone with a keen eye, have noticed the importance of the word "Woods" this year - mostly using the Tiger Woods story as vehicle. Note also, 2010 is the year of the Tiger. So, when I saw the Obamas in the Woods, I took notice.
There was another headline for a non-story, in which Obama's senior advisor went on Leno and revealed the "secret" that "Obama loves Pie." That made me laugh because Steve often says in his audio series that the culture creators "love Pi." But then, who doesn't?
Anyway, the Drudge "Woods" headline links to a single photo, among a gallery of 389 (8+9=17, making 317, the number of Osiris' death.) The photo caption reads:

President Barack Obama, right, watches as first lady Michelle Obama jumps as they go for a walk on a trail off the Blue Ridge Parkway near Asheville, N.C.

Not only does the Blue Ridge remind me of the Norway Spiral, it also reminds me of Chris Knowles' look at the Stairway to Sirius, which would be enough to bring all these elements together in northern Europe. But when you toss in the word Asheville while Europe is blanketed in the stuff?
When Obama doesn't go to the funeral of the murdered Polish president because of a giant cloud of Ash - But goes instead to a place called Asheville....
Well now you've got a serious smoke signal. And a genuine mystery on your hands.
Posted by Alan Abbadessa-Green at 4/28/2010 02:08:00 AM