Lady Gaga and The Killer Bees

Very often I try to remind myself what Frank Zappa said around the time of the PMRC hearings. In his battle against censorship, which I applaud loudly, he noted that songs were unlikely to lead children to suicide or Satanism or any of the other things the neo-conservatives claimed. His reasoning was simple. People were probably not behaving as popular music instructed them, because most pop songs were about love, and people certainly were not exhibiting an enormous amount of love for their fellow man.

But then, I am left to wonder if he could have imagined the way in which music composition has fallen into the hands of the very same Fascists that he warned us about. We now live in a world where the sciences of Psychology, Marketing, and Neuro-Linguistic Programming have merged into a for-hire Ministry of Propaganda, whose skills are deployed by anyone willing to pay for them. The continuing scandal of Payola alone should be a big enough hint that the mainstream record labels and assorted culture creation factories that make up the mega-corporations’ media empire will push anything for the right price. We’re at the point where the songs on your radio are highly-produced corporate jingles and the music videos are nothing more than TV commercials with choreography. While I am fundamentally opposed to censorship in any form, I do think we should know what these ads are selling us – so that each one of us can examine on a personal level whether or not we’re buying into it.

*****Please watch this short clip of Derren Brown proving the frighteningly effective advances in NLP (The video has embedding disabled, click link above or here to watch on YouTube.)*****

Bear in mind, that while I write this, I am eating a bag of peanuts that I had an inexplicable craving for the other day. Melissa just pointed out to me that there is an ad campaign all over the subways here in NYC from the National Peanut Board. Echoing our look at “March Madness” and March 4th/5th in particular, she just found this:

The National Peanut Board will turn New York City into Peanutopolis on March 4 and March 5 as it introduces its newest advertising campaign for America’s favorite legume, as well as a new slogan: "Peanuts: Energy for the Good Life."

The slogan, more than a year in the making, is part of an integrated multimedia campaign highlighting the energy-boosting qualities of U.S.A.-grown peanuts and peanut products and the way they become a part of all of our lives.
The event will begin with "Energy Central," an "Interactive, Educational Exhibit of all Things Peanut" in Vanderbilt Hall at Grand Central Terminal consisting of an actual peanut field with farmers from across the peanut-growing regions on hand to show attendees around.
On Wednesday evening, March 4, the action shifts to Astor Center, a landmark architectural gem in Greenwich Village that will sparkle with some of today's brightest culinary stars who will demonstrate new versions of authentic global peanut dishes."

In the post “Crazy 88s,” I wrote of the ever-present promotion of Nazism and related it to the movie “Kill Bill.” Mere weeks after that writing, Lady Gaga and Beyonce have now released a new video intensely laced with Nazi imagery and they even use the car from “Kill Bill” throughout it. The idea that these media puppets are promoting totalitarianism is not a new one, Beyonce had just taken the stage with dancing black-clad storm troopers during an award ceremony, after all. But “Kill Bill?” Really?

Lady Gaga and Beyonce teamed up for the highly Naziesque "VideoPhone" a few months back. That video is chock full of subliminals and even ends (at 4:53) with the split mind of Beyonce and the killing of one of her MK alters.
This new one, "Telephone" picks up where "Paparazzi" left off, with Lady Gaga going to jail for killing her boyfriend. After Beyonce bails her out, the two go to a local diner to kill Beyonce's boyfriend and everyone else in the place, then proceed to don American flag outfits and dance among the corpses.
VigilantCitizen did a write up on the video and, while I don't endorse all of his interpretations (nor his apparent fear of transvestites, nor any personal religious or political slant that may be injected into his summation, nor his corporate sponsors), I think he's pretty on target with a lot of it. ~Besides, we don't all need to agree on everything. We should strive to present our info as unbiased as possible and respect the variations in perspectives. Anyone who thinks everyone should think exactly the same way, is part of the problem. So, with that extra caveat, VC writes:
"While the customers are agonizing and dying, Beyoncé puts on the Mickey Mouse sunglasses, the same glasses worn by Gaga in Paparazzi while killing her boyfriend. 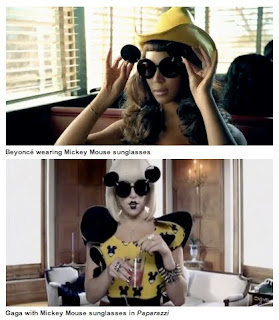 In both videos, the singers wore the glasses during the killings, hinting to the fact that they are programmed to execute the poisonings. As stated in previous articles, Mickey Mouse ears or designs often occultly refer to mind control , probably because Disney films were known to be used on MK slaves during their programming."
The MM glasses fit right in with March Madness and William Thuther from the Conspiracy Grimoire wrote in to that post with a link to his examination of the double-M. Among the blatant product placements, there is this shot of a Miracle Whip bottle, the MW being a mirrored MM. 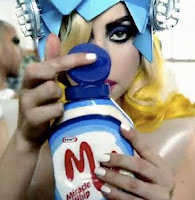 The glasses are a big clue, but what I find most intriguing that Gaga wore a bee costume in "Paparazzi" and now teams up with "Queen B," Beyonce, to become the Killer Bees - even going as far as using poisoned honey to kill everyone. 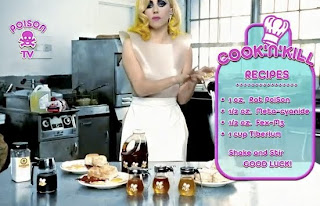 To be honest, I had no intention of writing a post on Lady Gaga. I had been working on a post about cereal grains, Osiris, Masons and HONEY! The delay in that post was so I could refresh my memory and pull a quote or two out of Terence McKenna's book "Food Of The Gods," as I remembered (having read it a few years ago) that he had a chapter or two about honey in relation to ancient hallucinogen rituals. The day after the book came, this video falls into my lap and starts to tie everything together.
Due to the fact that in the first part of the video Lady Gaga makes out with a fellow inmate with a fly tattoo, I'd have been tempted to dismiss the honey thing as a play on the old "You catch more flies with honey" idiom. But McKenna's retelling of the myth of Glaukos and another clue I found today at the supermarket has ensured that I will follow this honey meme wherever it goes - look out for the next big post, Circumpunct Breakfast.
And I would be wise to point out here that I don't believe it is completely negative. For starters, my girlfriend's name, Melissa, means "Honey Bee" and she is a very positive influence in my life. Like all the memes I seem to follow, and every facet of the universe I observe, this honey thing exists in complete balance. On St. Osiris' Day, I got a flash of insight into the numbers we have been following and threw 50 cents at the NY Lottery game "Win 4," picking 1788. Fifteen minutes later I was gifted with a much needed $2,500. It should be noted that I very rarely gamble at all. For those who have called my connecting of the dots crazy - that's a kind of crazy I can deal with. 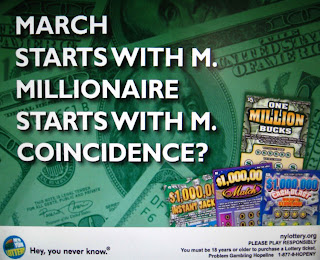 So, with the caveat that the honey meme is not necessarily a bad omen or anything like that, these Lady Gaga/Beyonce videos leave me with a terrible taste in my mouth. Not only is their promotion of Fascism detestable, there is another unfortunate sync that I came across. At the end of the "Telephone" video, the Killer Bees drive off in their "Kill Bill" truck like "Thelma and Louise." Do you remember where Thelma and Louise end up at the end of their story? The Grand Canyon, for a death ceremony, of course!

Follow the Grand Canyon to the Bee Attack. Bonus points if you noticed the 17 wrapped in the 33 in the lower right-corner.
The death and rebirth theme could only take us to Phoenix, where "a group of people where seriously injured when they were attacked by a swarm of bees."
As, I write this, there is a bigger story taking place: the manufactured circus that is the health-care vote. Funny thing is, amid all the division, they keep showing images like this: 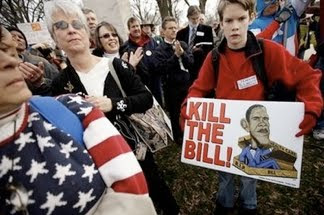 ###
UPDATE:
I snapped this pic of the March 18th front page of a local newspaper in Manhattan, called "Our Town," with the prime photo being that of Spelling Bee champion, number 33. 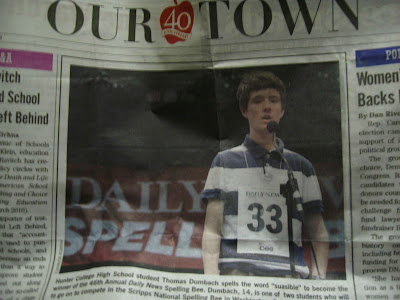 Interesting choice of words too. The winning word was "suasible" (meaning persuadable) and, according to the DailyNews article, the runner-up correctly spelled "prestidigitation" before her loss. Also note that, due to the camera angle, the banner reads "Daily Spell."
Posted by Alan Abbadessa-Green at 3/20/2010 07:08:00 PM