Lately I've been wondering why all this Osiris symbolism keeps coming up on the logos of modern grain companies. I mean, it is the year 2010, right? I'm currently entertaining a few possibilities:
I had updated the last post with the inclusion of this logo for a bread company which combines the Omega(End) symbol with an image of grain: the very two things Osiris was said to lord over.

I later noticed this same motif reoccurring on the logo for Ronzoni. The company name is framed by a golden "Z" made out of grain ("Z" being the last letter or end of the alphabet). 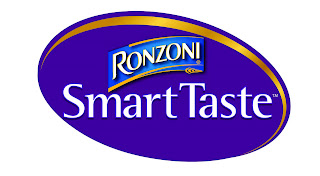 In all fairness, it could be that Ronzoni chose to emphasize the "Z" because it is considered a "power letter" in marketing circles.
Having previously worked in the pharmaceutical industry for many years, I recall the debate caused by the marketing departments giving all new drugs similarly spelled names so they could cram as many Vs, Ws, Xs, Ys and Zs into the brand name as possible. Basically, they felt the end of the alphabet had huge psychological power and signaled concepts of strength. Also, when an end of the alphabet character won't due, a hard consonant will suffice. They wanted their drugs to seem powerful and effective so they gave them nonsensical Seussian names and confused the crap out of all their patients. ...Of course the pharmaceutical industry has no concern for the masses, they just want to sell them drugs. Whatever it takes and all that.
The drug companies share the same ethics as Farmville's parent company Zynga (who also managed to shove a "Z,"a "Y," and the hard "G" coming off the "N" to make a corporate name that sounds like something out of a pulp space opera). Zynga CEO Mark Pincus was quoted as saying "I knew that i wanted to control my destiny, so I knew I needed revenues, right, fucking, now. Like I needed revenues now. So I funded the company myself but I did every horrible thing in the book to, just to get revenues right away. I mean we gave our users poker chips if they downloaded this zwinky toolbar which was like, I dont know, I downloaded it once and couldn’t get rid of it. *laughs* We did anything possible just to just get revenues so that we could grow and be a real business…So control your destiny. So that was a big lesson, controlling your business. So by the time we raised money we were profitable."
Nice huh? Click here to watch a video of him saying it.
Ronzoni could be borrowing from another famous emphasized "Z" - that of Verizon. Besides the canted red checkmark/box to go with their Nazi colors, they even invoke the Solar cult. The company said the name was meant to combine the words "Veritas" and "Horizon." Veritas means truth, something no modern telecommunications company can rally behind since they got in bed with the NSA. (Just a reminder kids, Obama's first week in office he signed off on keeping those wire taps in place).

But the word Veritas becomes more interesting when combined with "Horizon." Since Horizon comes from "Horus is Risen," we have our Solar cultists reuniting with their Nazi iconography. Remember, the canted swastika was meant to be a Solar symbol.
So "Veritas" and "Horizon" = "The True Horus is Risen." Or we can take that as "The True Sun God is Risen."
I just googled "Hitler and Egypt" and came across a site which details "Adolf Hitler's strange interest in Nefertiti." There's a funny sync with a link to their gallery of presidential portraits over an image of Nefertiti and Akhenaten's daughter. 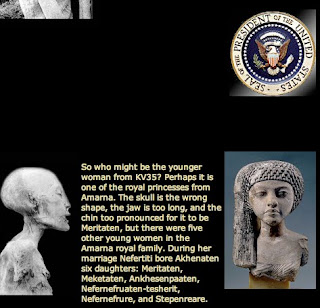 It's funny when you consider that there are people (some of whom I respect highly) that are openly debating whether our current President is more like Akhenaten: 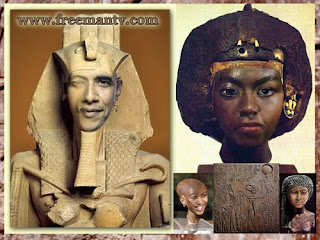 ...or if he's more like Akhenaten's son, King Tut. 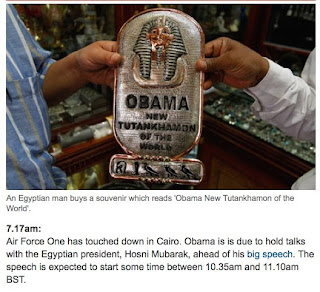 See Freeman and Chris Knowles, respectively, for examples of the two sides of the argument.
Now that Obama has come into the mix, let's bring in the other half of our famous pairing. That's right - We're going to the circus! 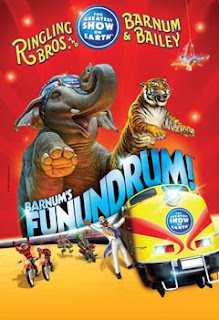 But this circus isn't all that fun based on a symbolic and/or conspiratorial reading of its poster. This is the closest variant I could find online (I saw a similar poster in the subway and stared at it for 20 minutes). When I see the words "Greatest Show on Earth" I immediately think of politics, because that's all it is folks. A big show.
Does this circus poster reveal anything about the future of politics in America? Man, I sure hope not.
I hope I'm wrong, but that's what it looks like to me.
Currently, Ringling has three tours going on. This one, Funundrum is their Blue Tour. They also have a Gold Tour called "Illuscination" (read what you want into that loaded name). The third is the Red Tour and it is called "Zing Zang Zoom." Not only does it have the triple "Z" - it also contains OZ embedded in "Zoom."
I know what you're saying, that's nonsense. Well, wouldn't you know it, the site for Zing Zang Zoom features a yellow brick road. And where does that yellow brick road lead? 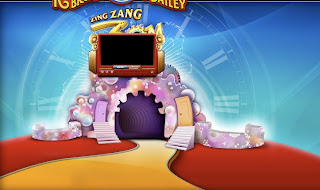 Between two doors atop staircases that look like pillars, into a wormhole, surrounded by a clock or time device.
Now, if you haven't already, watch Jake Kotze's classic look into the 9/11 Stargate. And don't forget, it's a one letter slide from NY to OZ alphabetically.
*My apologies to Jake. He disabled embedding on his vids so I had to find an alternate source.
(Seems a few others have re-uploaded his vids)
No intention of being devious, just think everyone needs to see these sort of videos.
Please check out Jake's blog.
Posted by Alan Abbadessa-Green at 4/26/2010 10:33:00 PM