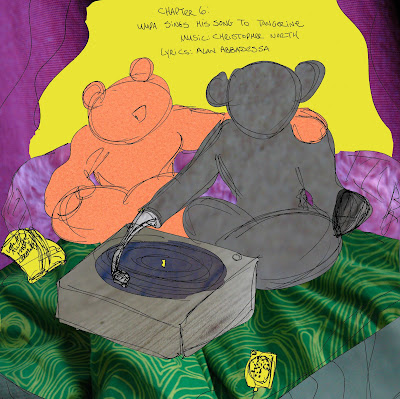 I was just filing away this new album art I made for the Chapter6 song release on AmieStreet and, while trying to sort my erratic collection of computer files, I came across this forgotten image: 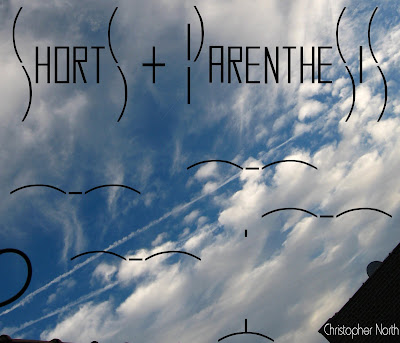 This was a concept I developed for a Christopher North collection, originally titled "Shorts and Parenthesis" (or at least that's what I thought he said over the noise in the bar). It ended up with a different album name and different artwork. ...And I doubt Chris saw any connection between his anthology of short film scores and my depiction of Space Invaders descending through Chemtrails, but I made the entire image and text out of dashes {or shorts} and parenthesis - except for the photo obviously, that was taken over my apartment.
Anywho, when I saw this image again, I looked at that phrase (which I always liked) and this sprang to mind. I don't know if it's any good, but it's what came to me.
The devil is in the details
Quarks and comet tails
A box with demons and hope
We're all under the microscope
Of cameras and flashing lights
But something's hidden from sight
Read between the lines
There's something in our minds
Better left unsaid
Alive, but mostly dead
In a waking dream
Things are more than they seem
Words unspoken
The mind ripped open
Simpler than simplicity
Something like synchronicity
Commas and ellipses
Shorts and Parenthesis
Posted by Alan Abbadessa-Green at 4/02/2010 07:27:00 PM

Labels: Life The Universe and Everything, Look At All The Happy Creatures