I don't want to talk about politics. Really. I'm thinking of refusing to ever again talk politics in an election year. It just makes people say even stupider things than usual. Right or Left, they both just suck so badly and the war machine just goes on and on. It's infuriating and sick-making.
But, I stumbled upon a few interesting symbolic tidbits that I can't help but share...

The New American magazine, put out by the JBS, has an interesting cover story in their latest issue. Considering these are theocratic conspiracy guys from the religious right, theoretically exposing all sorts of Masonic symbolism and pagan voodoo magick and silliness like that, you'd kinda expect that they'd have to know what a major double entendre they're playing with here...

Then there's the big National(istic) Conventions. This year, the Republicans are holding theirs at the Tampa Bay Times Forum. I find the logo interesting in that it both looks like a cage and contains a veiled 44 (Obama's number and so much more).

In 2009, Britney Spears performed at the Forum for her "The Circus Starring Britney Spears" tour. The show is also notable for a wardrobe malfunction and the remark, "Okay, my pussy is hanging out of this fucking --", after she performed "I'm a Slave 4 U" and didn't realize that her mic was still on. The incident later received notable attention and has received thousands of views on YouTube.

Wiki also gives us another sick piece of history that, aside from the disgusting celebration of theoretical murder (perfect for a NeoCon celebration), also ties in fascinatingly with the Osama KingKill:

Tampa hosted WWE Extreme Rules on May 1, 2011 and it was the arena's first WWE PPV since Survivor Series 2000 in 11 years after they replaced the Amway Center in Orlando, the original location for the event. Following the PPV's conclusion, newly crowned WWE Champion John Cena announced the death of Osama Bin Laden which resulted in a big "USA!" chant and internal public address system of the Forum then proceeded to play "Stars and Stripes Forever". This event also features Christian winning his first world title after defeating Alberto Del Rio in a ladder match for the World Heavyweight Championship that was vacated by his real life best friend Edge, who was forced to retire due to a career threatening neck injury as he was originally scheduled to defend the title against Del Rio, but later showed up in a jeep to distract him which allowed Christian to take advantage. Edge then congratulate Christian after the match as the two embrace in the ring to a massive ovation from the crowd.

Christian on the Edge--the Dweller on the Threshold... that should take us to the much more symbolically interesting Democratic National Convention:

The first three days of the DNC will be held at the Time Warner Cable Arena, located at 333 East Trade Street. 333, aside from being a Choronzon reference, hints at the thinly veiled triple pyramids in the venue's logo: 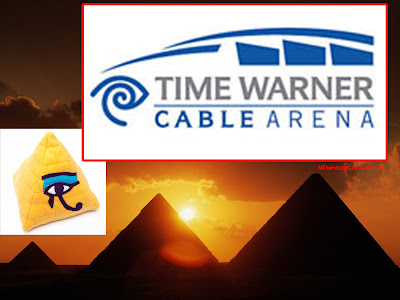 Note also the two lines coming out from the left side of the pyramid in the Time Warner Cable Arena logo. They are stepped, seeming to hint at the Stairway to Sirius, but perhaps even more explicitly hinting at this: 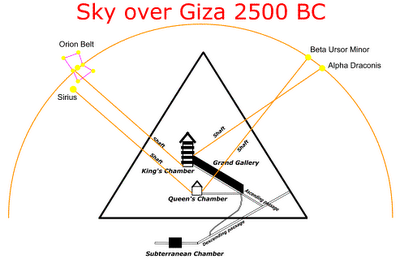 It's all very tantalizing, but, at the end of the day, all the symbolism (and even what is potentially high ritual) sort of takes a back burner to much more obvious methods of influence. Yes, America is controlled by Eyes in Pyramids, but that doesn't necessarily implicate the "Illuminati." The Eyes in Pyramids that are running the political show are the same ones they've always been. They're printed on the back of little green pieces of paper... 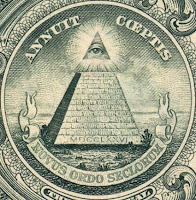 ...and Obama can be seen dancing for them like the whore he is.

The fourth and last night of the DNC, where presumptive nominee Barack Obama is expected to deliver his acceptance speech, will be held at Bank of America Stadium, also known as "the Vault."

Same as it ever was.