Ghost in the Mirror

About two weeks ago, I had dinner with a few friends from work. They were aware that I had just finished working on The Sync Book and they knew that it had something to do with magic. So, they asked for my opinion on a bunch of topics not really covered in the book (which takes magic as an esoteric study), but more along the lines of the "Supernatural" and experiences with ghosts and such. They talked about their supernatural experiences and I talked about mine (which include quite a few encounters with what might be considered poltergeists - most of these involve a particular house I lived in when I was younger). While these could be a topic for future blog posts, that's not really why I asked you here today.

At this dinner, while sharing "ghost stories," one of these guys pulls up a YouTube video of a Japanese girl looking into 3 mirrors. At some point, she turns around and one of her reflections "stays." Watch it here:
Yesterday, my wife and I went to the library and ended up grabbing two DVDs. One was Disney's Atlantis, only to come home and find a post on Mask of God about the same movie. The other was this strange Japanese movie, called House, that called out to me for some strange reason. I knew nothing about it and there was very little info on the DVD case (I actually thought it was going to be an animated movie), but it just seemed like I should pick it up. I turns out to be a crazy trippy horror-ish movie that was one mind fu3k after another. Anyway, about an hour into the movie, we see the main girl walk into a room with a similar 3 mirror set up as that YouTube clip. 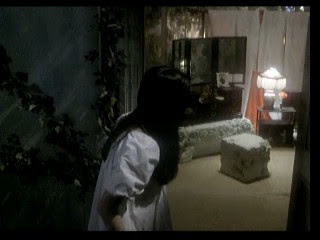 I turn to my wife and say "I want to see her sit in front of those mirrors and brush her hair and then turn around and have one reflection stay, like in that YouTube clip we saw two weeks ago."
The movie cuts away to another scene for about 5 minutes, then cuts back to the room where the girl is brushing her hair and this happens: 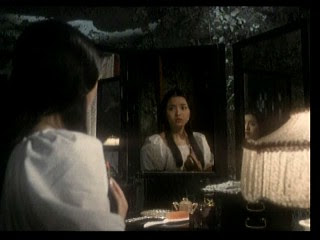 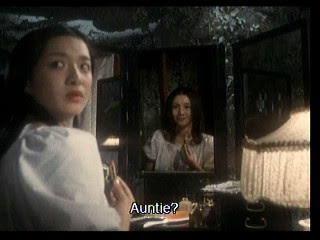 Now, I am left with a question. To me, this wasn't exactly a normal "sync wink," but perhaps it was. Perhaps I somehow "knew" this sync was waiting for me and grabbed the movie because of it. Or, perhaps I manifested a desired reality...sort of creating an "intentional sync." That would be what we call "real magic."
The question, what role does an observer of media have in its actual creation, can be compared to the double slit experiment. Please take an additional 5 minutes of your day and watch this:
Posted by Alan Abbadessa-Green at 10/18/2011 06:46:00 PM

Labels: Life The Universe and Everything, Matrix Motif