We're All Going To Die Tomorrow 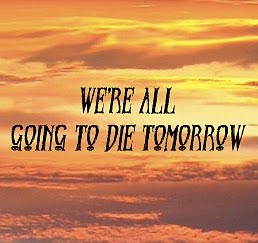 Something I’ve mentioned a few times before is that I was approached in 2007 to write a book about the 2012 phenomenon. The publisher didn’t care that I wasn’t particularly well versed in the subject since he was looking for a flash in the pan piece of crap. He wanted me to write it from the perspective that “the world was going to end” and “scare people into buying books.” My financial situation was about as bad as it is right now so I tentatively said yes with the caveat that I would present the “end of the world” as one of many possibilities for the future. A few months into my research and writing, he sends me this mock-up cover (which obviously took someone about 30 seconds in Photoshop): 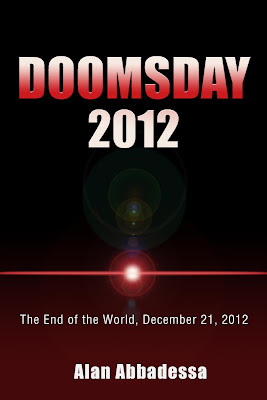 So, after seeing that “Doomsday” bit, I was sort of like, “um, what the Fu3k?” and we couldn’t come to an agreement and I ditched the project. I had just started playing with the original concept of what would become Look At All The Happy Creatures, which at that time was going to be a video series called It Happened Here (a play on Sinclair Lewis’ It Can’t Happen Here). My friend and collaborator on Squares That Touch, the awesome comic book artist Peter Palmiotti, talked me through that period in a therapeutic phone conversation where he advised me to tell the 2012 publisher to screw himself and work on the projects I really cared about. Thanks Pete! So, now a few years later, “Happy Creatures” is a finished novel (and will be available soon).
Anyway, about two months ago, I found myself back in similar financial dire straits and I received a somewhat similar call to action. A guy calling himself Dan Steely (which is obviously a phony name) emailed me asking if I’d be willing to help him on a project. His idea was to take the 2012 Doomsday meme and lampoon the hell out of it in a book called We’re All Going To Die Tomorrow. I figured the doom and gloom could use a few pokes and prods (and my wallet needs a blood transfusion) so I agreed. This is the final product: 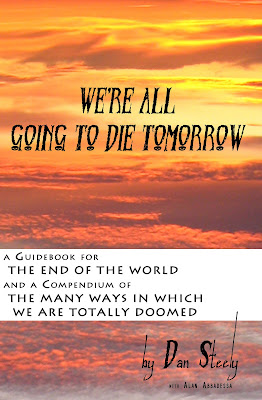 I wrote an introduction, which became “The Guidebook for the End of the World” and contributed a few pieces to the “Compendium of The Many Ways in which We Are Totally Doomed.” The compendium is a list of 52 things that could bring about the end of the world and each one gets a one-page write up filled with bad jokes and potty humor (*Not for kids). He had a smaller list with the standard “Earthquakes” and “End of the Mayan Calendar” and so on, but I got to inject a few more that were nearer and dearer to my heart. I wrote about 10 of them, including “Wormwood,” “Panspermia,” “Hot Hail from the Planet Mongo,” “CERN/LHC” (with a “Poltergeist” reference for Kevin) and “Gay Sex” (Gay Sex as a way of bringing about the apocalypse? That one’s for you Michael).
You can probably read the whole book in one bathroom sitting, but hey, it’s cheap. At $6.66, how are you going to argue? You can buy it off Amazon, but if you’re actually going to get it, please buy it off this link because I get a higher percentage. Oh, and if it’s any extra incentive, I was given a page to plug my stuff and I told him to just put in an ad for The Sync List – so maybe we all get a little extra traffic out of the deal. Who knows?

Now, if this doesn’t sound like your cup of tea or if you’re as broke as I am, save your money because Look At All The Happy Creatures will be available for purchase in about a month and I’d much prefer you own a copy of a book that I’m proud of. But, after that raving endorsement, if you’ve got 6 extra bucks, then by all means, please go right ahead and pick one of these off the tree of knowledge. I just received a copy in the mail and it’s actually pretty funny.
Posted by Alan Abbadessa-Green at 2/17/2011 04:56:00 PM