Alan on the Corbett Report and Vinny Eastwood show

This week I was the guest on two radio shows that present similar topics from two wildly different perspectives. James Corbett of the Corbett Report, who broadcasts out of Japan, is a serious man. Vinny Eastwood is a radio host from New Zealand and his approach is to lighten things up with a healthy dash of comedy. Transitioning between the two shows was a little jarring for me, but a healthy embodiment of the balancing act I always talk about. These were also the first two video interviews I have done, which adds an interesting element for the interviewee. Funny thing is that I didn't know Vinny's show was on video so I came a bit under-dressed, but you get to see me in my natural habitat. :)

The world is both physical and metaphysical, not one or the other, you can either move a chair in 2 seconds or study to be a telekinetic monk for 60 years and then move the chair. We must take some responsibility and be aware that meaningful coincidences in life are extremely important to how we interact with other people and the world itself. A revealing and insightful interview on the nature of psychedelics and intellectual evolution.

Or watch the video if you really want to look at my mug for an hour and a half:

Bonus sync: I mention a comic book that I worked on with fellow-NewYorker Rammer Martinez Sanchez, right up to 9/11, when the work took a backseat to the real-life craziness around us. Here's a page Rammer drew in 1999 or 2000 that shows all of NYC and the surrounding area turned into a giant crater: 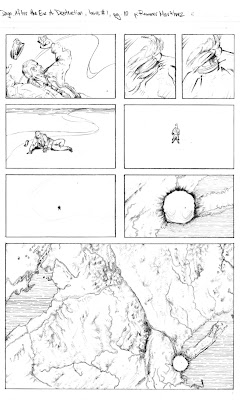 This sync should have been mentioned in my SyncBook Vol.1 chapter, alongside the other strange 9/11 precursors in my artwork leading up to 9/11, but I had actually forgotten about it. I only found this image a day or two before being contacted by Vinny Eastwood to do his show. The even crazier thing is that the story this image is from tells that only three people in all of New York survived. One of these men was named Vinny Eastman! That character was also a representation of extremes of comedy and tragedy, just like Vinny Eastwood's "lighter side of genocide" approach. . . The syncs are SO specific, that it's just F-ing insanity.

Then, on Wednesday, I was on James Corbett's Corbett Report. This was the first interview in a long time that I was really nervous about. I think that shows in the first few segments, where I'm a little hesitant to assert my position. However, after a silly live call-in I decided to take back that personal power and lay out my information to a place that is not so easy to challenge. In the last twenty minutes I lay out some of the mind-blowing information I have on the Osama bin Laden "killing." I think the shock on James Corbett's face at the end says it all. If a man like him can be flustered by the data, I don't feel so bad about my being so.

Tonight we talk to author and researcher Alan Abbadessa-Green, editor of The Sync Book, about the study of synchronicity in politics and world events. We discuss “the killing of the king” meme as it pertains to the deaths of Lincoln, JFK and Osama Bin Laden.

Or watch the video:

Bonus sync: Shortly after the show, I noticed this spread in the headlines at Drudge: 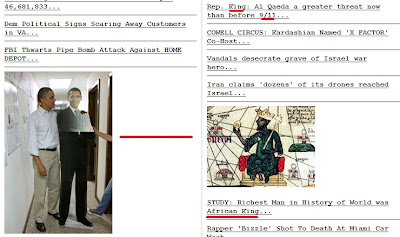