This was a wild weekend for me. Considering these were the same three days that The Book of The Law was written, I guess that should be expected.

+
I spent friday at the pre-party for the Museum of Comic and Cartoon Art (MoCCA) where I met some amazing artists, including Kenly Dillard who asked me to come up with a random thing for him to draw. I said "a monkey and a dog," thinking of two of the main characters from Look At All The Happy Creatures, but not explaining that in any way. Here's what Kenly drew: 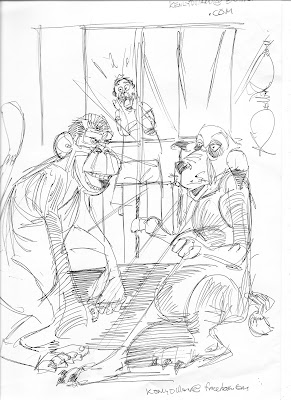 Kenly draws caricatures and portraits, echoing an episode of Sailor Moon that I saw a few days ago. This episode was powerful to me for so many reasons. It questions what makes an artist and portrays the struggle to stay true to oneself. It also delves into mirrors and dreams (which is the theme of the entire SuperS season). These themes resonate so strongly with me these days and I am not alone on this. Michael from Gosporn put up a post recently about the dreaming man in the mirror.

+
On Saturday I attended the MoCCA main event and was surrounded by some of the greatest and most original artwork I have ever seen. Very inspirational. I also had the chance to sell a bunch of copies of Look At All The Happy Creatures and got some really positive feedback. Also very inspirational.

I saw a girl there wearing a shirt with a unicursal hexagram (widely used by Crowley) on it. When I commented on the shirt, she said she made it herself. Shorly after that encounter I got a phonecall from Kevin of Live from The Logosphere, who is very into Crowley.

Later that night, I was the second hour guest on The Church Of Mabus Radio Show, with ufologist Tim Beckley as the first hour guest. This one was a lot of fun. I did the interview outside the MoCCA after-party with drunk people coming up to me throughout. Apparently I can hold drunken men steady, light their cigarettes and chat about the cosmos at the same time.

We spoke about many of the items I came to find waiting for me in the latest post from The Mask of God. So many wild and weightly syncs between my weekend, that interview and that post. Great stuff.

+
On Sunday I spent the day catching up with family which was really nice. Then at night Melissa and I went over to Radio City where I knew Charlie Sheen was wrapping up his New York tour of his "Violent Torpedo of Truth" one-man show. I had one copy of the book left and I thought I should give it to him since I feel his recent adventures echo some specific plot points in my novel. From Chapter 33 of LAATHC:

They had gotten him addicted to the filthiest synthetic pain killers which made his behavior even more erratic. The massive amounts of antibiotics injected into him to keep his wrists from getting infected played havoc on his stomach. He was always nauseous and, when he could keep the disgusting food down, it quickly passed through him in a stream of diarrhea. His body was weak, but wild – his mind even more so....He had to be made to look a fool in the eyes of the public. This was necessary as a way of signaling to the watching world that one would have to be insane in order to oppose The State. Besides, The Network could afford to knock the celebrity of one of their performers, now that they had a genuine super-star on their hands.

Of course, when Charlie exited the theatre he was swarmed by paparazzi and I couldn't get near him. After that I was kicking myself for not chucking the book at his head, since that would have been captured by every camera there and it would have played in an endless viral loop, making my book sales off the charts (or at least, on the charts). Talk about a "violent torpedo of truth." But, I didn't do it. I guess I'm not that much of a whore. Gonna have to go back and watch that Sailor Moon episode again.
Posted by Alan Abbadessa-Green at 4/12/2011 07:29:00 PM